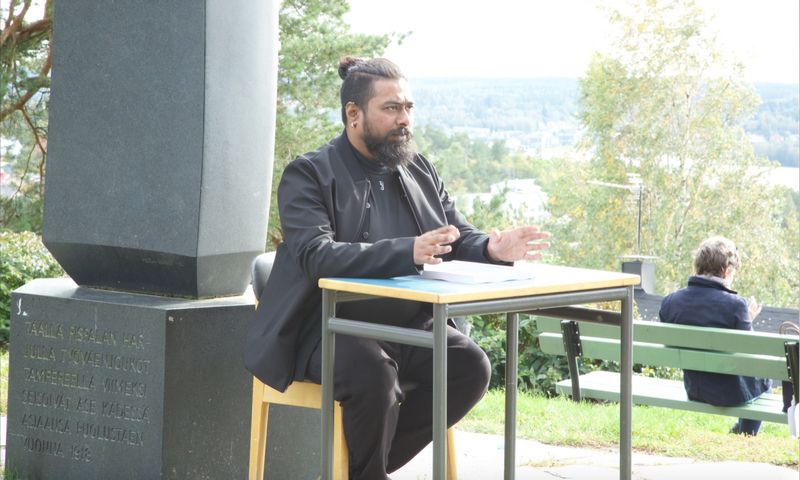 Narrating War is ongoing multimedia performance-reading of 'War List Codex', a
comprehensive timeline of every ‘war, battle, revolt, revolution, siege,
sacking, rebellion, bombing & insurgency’, from 3000 BC to the present.

This reading took place at The Memorial of the Red Guards, on September 6,
2016.

The Red Gaurds died during the Finnish Civil War in Pispala, Tampere. The
inscription in the stone says,

‘On this Pispala ridge, the Red Guard in Tampere last stood with weopans in
hand defending their cause in 1918’.

The project is ongoing and a copy of the book in its current state is donated to the Pispala Library on the occasion of the exhibition, ‘Where does poetry nest?’, on 6th September, 2016 in memory of the over 5000 year old Civil War that the world, it seems, has not seen enough of.

Poetry – an everlasting inquiry of art, drives language outside its borders. Poetry sets into play every possible moment of signification by placing the exercise of imagination at the center of all contradictions. Poetry as an aesthetic praxis outlines our possibilities to challenge the everyday, locating potential transformation at the centre of our political enunciations. Poetry contradicts and slips between the cracks of meaning, propagating evidence that something else is there. In its intimacy, it draws complex figures from our emotions, just to blur them into new and old unreachable impossibles, to keep us moving, desiring.

If we listen to poetry carefully, we realise that it is something social. Its sociality is voiced as a constant transgression to the de politicised forms of enunciation; these poetic echoes keep on challenging every space of retreat. Poetry captures tautology and pushes it to the edges. Since there is no purity in poetry, it confronts general assumptions with a subtle whistle that triggers a dance of our subjectivities, nude and broken out in sweat. There is nothing too radical for poetry; even if something has already been said before, it can always be said differently.

Poetry is looking back at us from the other end laughing, flirting, fugitive.

Poetry grounds utopia not as something reachable, but as a practice for keeping the unreachable present. Inhabiting between sentences, it bears testimony that other histories have always been present, through gluing their words together. Within it, art becomes our interlocutor for these other histories, always rebelling, always demanding justice and dignity, driven by the air which feeds change. Another history which finds in every wall not a border, but a place for public denouncement and mobilisation.

Where does poetry nest? It is not a question asking for an answer, but a question mark waiting to be followed.

[*] The Mexican artist David Alfaro Siqueiros recalled this question during his time in Lecumberri prison: “Where does poetry nest? I can’t say how long ago this question emerged within me. But it reemerged when I listened to Macario Huízar. And the first time I followed it through to interrogation was in prison among a group of dopers.”