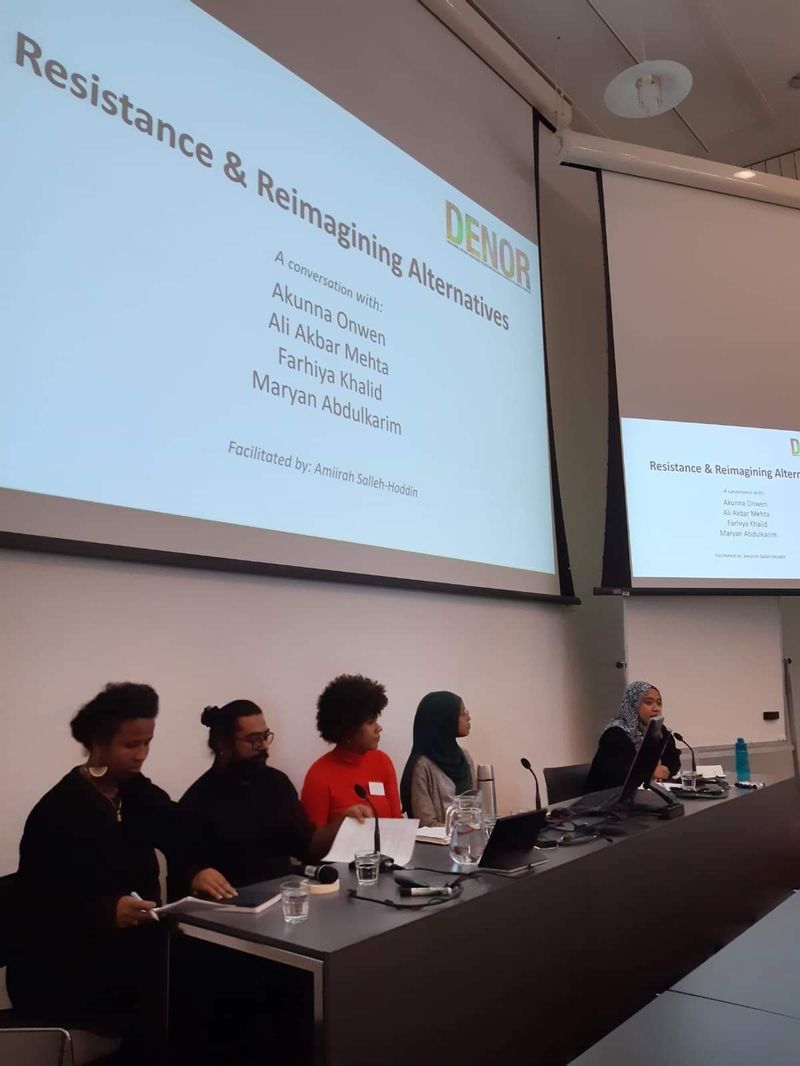 In November 2019, I was invited to speak about Museum of Impossible Forms.

The following is the transcript of the talk:

I always think it's good to think about how you arrive at the work that you do. There's always a story to the combinations that we bring to our work and to the world. And I would like to thank the Nordic Decolonial Workshop for inviting me to share some of the work we do at Museum of Impossible Forms.

My name is Ali Akbar Mehta. I am here today to speak in my capacity as one of the Artistic Directors of Museum of Impossible Forms, who along with Marianne Savallampi are involved in the core programming of the space. Together we curate the space, undertake the administrative duties, provide technical support, shift the furniture and make the coffee.

Museum of Impossible Forms (m{if}) is a cultural centre run by artists/ activists/ curators/ philosophers/ and is located in Kontula, East-Helsinki. For us the Museum is a space in flux – a contested space representing a contact zone, a space of unlearning, formulating identity constructs, norm-critical consciousness and critical thinking. ‘Impossible Forms’ are those that facilitate the process of transgressing the boundaries/borders between art, politics, practice, theory, the artist and the spectator.

Museum of Impossible Forms is a free space, which means that not only does it not charge artists a monetary fee to use the space, but also that we make available our resources ( a multilingual library, an ongoing archive, and a space for events and workshops) and expertise to artists we host, and to the surrounding community. All events in the space are free for the audience to attend. Furthermore, we compensate invited guests, artists, curators and speakers to support the integrity and ethics of cultural labor which is all too often underpaid, and underappreciated.

The Museum of Impossible Forms opens up a broad horizon though its political character, its accessibility and openness, its multilinguallibrary, an ongoingarchive, and through itsworkshops and events.It facilitates curated discursive art programs, with an opportunity for norm-critical dialogue framed within the discourse of decoloniality, intersectional feminism, and queer theory. These equally create a complexmind-space fuelledby these socio-political ideologies that are shared by the members of the m{if}, and that become visible through our various efforts. We are striving towards a para-institutional culture that focuses on ‘Alternate Pedagogy’.

Museum of Impossible Forms M{if} was founded by an independent group of Helsinki artists/curators/philosophers/activists/pedagogists in spring 2017 as an antiracist and queer-feminist project, a heterogeneous space exploring experimental and migrant form of expression. It is the coming together of a collective of people – artists, curators, pedagogues, philosophers and facilitators – art and cultural workers who believe in the need for this space. M{if} currently consists of:

Beyond these individuals, Museum of Impossible Forms works with a number of collectives, organisations and institutions to create a lattice of shared concerns and practice solidarity. Some of these are:

Our curatorial framework for this year has been ‘The Atlas of Lost Beliefs (For Insurgents, Citizens and Untitled Bodies)’, based on a poem by poet, cultural theorist and curator Ranjit Hoskote:

The Atlas is ‘a book of maps or charts’. We gazed into the Atlas and dreamt of places we would like to visit. The Atlas was our window to strange and alien worlds, connected by an incomprehensible amount of water. Today, the Atlas as a portal, as a device for dreaming is a forgotten artefact, instead mired in historiographies and anthro-political readings of a world that was.

Even now in a time obsessed with the past, devoted as it is to the cult of memory and the fetish of heritage, something still goes forward. Even now when there is no general direction, nor a subject who is supposed to lead, we cannot but ask where to place our next step, what to take along or leave behind. Yet there are still prospects, or in philosopher Bruno Latour’s words, “the shape of things to come.”

In postcolonial theory, unlearning dominant knowledge has been repeatedly discussed as an important practice for challenging the value-encoding apparatus from inside the structure of knowledge production. Is it even possible to simply leave dominant knowledge behind?For us, the answer is clear – there is simply no way back to a time or place before the history of relations of power and violence that are responsible for what we know today. For us, it is an absurd position, one that may even support the hegemonic power relations at play; “unlearning” is not merely interested in finding ways to avoid hegemony, but instead in formulating counter-hegemonic processes. Unlearning therefore neither involves imagining going back to a time before the current power relations were in place, nor a clear-cut correction process. It is about naming and thereby socially transforming histories of violence and spaces of agency created by resistance and struggles for liberation. In this sense, it is a form of learning that actively rejects dominant, privileged, exclusionary and violent forms of knowledge and acting, which we still often understand as education, and knowledge.

The question that we at Museum of Impossible Forms are asking is, “How can we propose an alternative?”

Where is our agency?