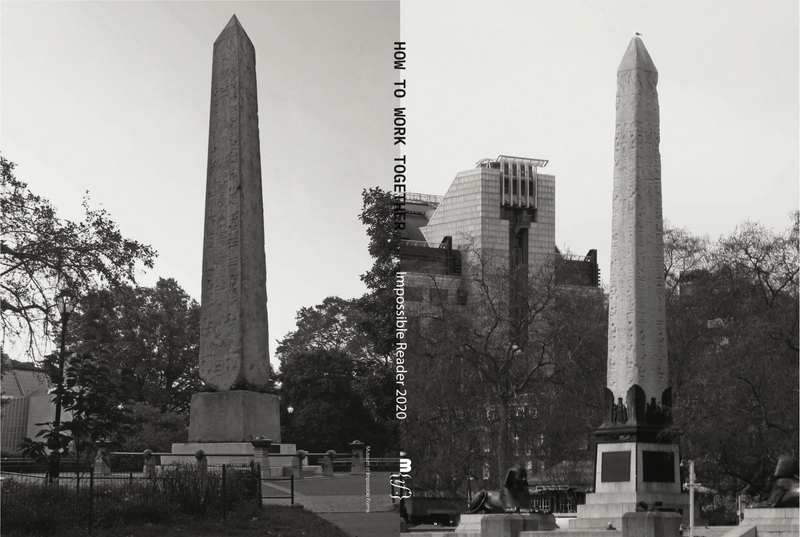 Mif ~ How to Work Together? Seeking Models of Solidarity and Alliance

The Impossible Reader is a biennial book series published by the Museum of Impossible Forms. The theme of the 2020 reader is How to Work Together – Seeking models of solidarity and alliance. It gathers a selection of essays, writings and poems on and around the topic of collective working practices. The publication also reflects and celebrates the past four years of operations of the Museum of Impossible Forms cultural centre in Kontula.

The Reader features entries by:

The Reader is available for purchase at the Museum of Impossible Forms.

Many of us, whether separately or collectively, have confided, shared or spoken out, about the difficult and precarious conditions in which most of us as artists and cultural workers continue to work. Most often our working conditions are exacerbated rather than relieved by the conditions of competition that frames the ecology of our art and cultural fields, whether competitions of resources, attention, spaces to exhibit, or grants. These conditions of competition exists across visual, literary, music and sound, cinematic, conceptual/ contemporary and other forms of arts, as well as within social, political and activism based workings; and in many ways ties us together as fellow-competitors, despite our collective wish to work together as friends, collaborators, and like-minded individuals.

We at Museum of Impossible Forms aim to take these conversations forward and consolidate our thoughts into a singular form, without hopefully losing the plurality of the voices that need to speak about the unsustainable nature of this ecology and strain it puts us in our various spaces of thinking, making, doing, and producing.

In our work since 2019 and guided by our curatorial framework, An Atlas of Lost Beliefs: For Insurgents, Citizens, and Untitled Bodies, the Museum of Impossible Forms have laid primary emphasis on collaborative working, either in sharing resources or simply offering the M{if} space. In 2019, approximately 35% of the events conducted were such collaborations or simply events that we hosted. Placing ourselves under these conditions not only allowed us to learn more, but it also allowed us to learn more diversely. It created for us the conditions to create a new series of ongoing events in directions we could not have anticipated. The Museum led us in directions of knowledges we didn’t know we needed to ask.

Museum of Impossible Forms initiates the second volume of its Impossible Reader under this rubric, titled HOW TO WORK: Seeking models of solidarity and working In alliance.