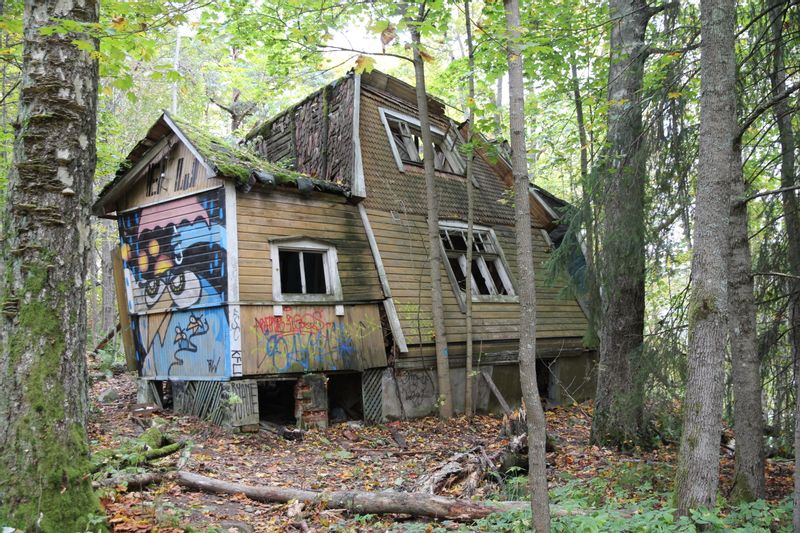 A brief historical record of the Kruunuvuori Villas, by Ali Akbar Mehta

In in the midst of an old forest, next to a pond that could be anywhere in wilderness is the area of Kruunuvuori, which in the etymology of Suomi means ‘The Crown Mountain’ – which is about three kilometers from Market Square in the very center of Helsinki as the crow flies – has ghostlike old villas hidden amidst ancient forest left at the mercy of nature, with only the slow inevitable passing of time as its companion. Dilapidated and forgotten for decades, these villas still struggle against elements and time.

The Kruunuvuori villas – one of Helsinki’s oddest and simultanously the most treasured and the most publicly well known secrets, may probably not exist for much long longer – (many believe that the year 2015 is the last year of the presumably indefinite building ban that it was placed under, and so the demolition of almost all of the villas could very well take place in the Summer of 2016). Of all the villas surviving their various states of ruins, only a few seem to be structurally sound enough to be conserved as Heritage Sites, although that they will be done so, is doubtful.

It’s hard to experience the Kruunuvuori villas without thinking of Charles Dickinson’s Miss Havisham’s abandoned mansion. After being left at the alter, the estranged character lets time be the sole master of her house and mind:

It was spacious, and I dare say had once been handsome, but every discernible thing in it was covered with dust and mould, and dropping to pieces. The most prominent object was a long table with a table-cloth spread on it, as if the feast had been in preparation when the house and the clocks all stopped together. An epergne or centre-piece of some kind was in the middle of this cloth; it was so heavily overhung with cobwebs that its form was quite indistinguishable.

It used to be a village full of villas built in 19th century, when Laajasalo and all of eastern Helsinki were just fields and forests. The stunning coastline and lush forest made it a paradise. In 1905 Jacob Cygnaeus, (the son of the founder of Finland’s previous grammar school system Uno Cygnaeus), bought the area, and in 1914 it was sold to a German commercial councellor Albert Goldbeck-Löwe. Albert Goldbeck-Löwe acquired the area and developed it into a resort for the upper classes and the wealthy Germans who lived in Helsinki, but over time it became available to the middle class masses as well. The period from 1920 to 1950 are considered the peak golden years of the Kruunuvuori villas, with a steam boat service run for the residents connecting to the main land city of Helsinki.

After Germany lost the Second World War, ­as part of the armistice between Germany and the Soviet Union, The Governing Body of foreign properties moved the Germany-owned Kruunuvuori to the Soviet Union and the Communist Party of Finland and it became a holiday resort for its members. After that it was used by the Soviet Union and Finnish communists.

In 1955 the founder of Palkki Oy, Aarne J. Aarnio bought the area and in the late 1960’s architectural company Toivo Korhonen envisioned a city plan for 2800 citizens with 78900 floor squares of residential development. The signature of the deed of sale was the proverbial fatal blow to the status of premium and delux villa communities. Aarnio’s interest in construction was the development of a residential area – not the maintenance of a villa area.

Drawn up in 1968, the building plan included up to 12-story tower houses. However, the city did not want to agree to such a thing, because the area was too remote, the planned infrastructure was too massive and the task of construction would have been no small thing. And so, zoning laws hindered the construction plans – Aarnio tried to get the area zonimg and building permits from the governemnt proposing the building plan in 1977 – and again in 1982 with a reduced floor area. And once again 1998 – to no avail, the city government was by now developing the southern part of the Laajasalo Peninsula – the Oil Port area for future use.

Of course, the villas still belonged to their former owners and while the community remained vibrant and active for a while, a feeling of uncertainty began to creep in and maintenance of buildings was soon being neglected. The negative successive building permit made Aarnio loose interest in the project – and the area was ordered to a building ban ­­. Silently, the decadence faded, and decay began to seize the mountain. In an ironical twist of fate resulting from thisstalemate, more than 90% of the region is owned by the CEO, who cannot do anything with it due to non-compliance of the governement, and the City Planning project concerning the Oil port in southern Laajasalo is already underway.

The vast majority of villas are dilapidated, collapsed or burned. Last arson was 04/06/2015, when the red cottage – Lilla Kronberg turned into heaps of coal. In 2011, Helsinki was doing a study of two or three of the villa on the protection, but since then nothing has been heard. One of the possibly to-be-protected villa has been destroyed as a result of arson. The museovirastokin mapping found that two of the Kruunuvuoren villas are still active and urgent measures may still be salvageable, although the refurbishment would probably be too expensive an option.

The Crown Mountain is a mysterious place, ideally seen and experienced in person. Amongst the woods and fog stands this beautifully sad monument, a decaying memory of the old glory days of the aristocracy and high bourgeoisie that still resists the ravages of wind, snow and builders without scruples.

The possibility of alienation in a city that claims cosmopolitanism as a constant, cannot be attributed to the loss of cultural space specifically due to revisits to the city’s history, but bizarrely it has and specifically in particular covering up of history that attempts to erase many diverse histories. The Project aims to shed light and make people aware of the forgotten public and personal histories related to the Kruunuvuori Villas. it fights nostalgia by documenting it, recreating it through videos, conversations, staging ethnographic reconstructions and most importantly through a dissemination of information that is misconstrued and twisted to hide facts in plain sight.