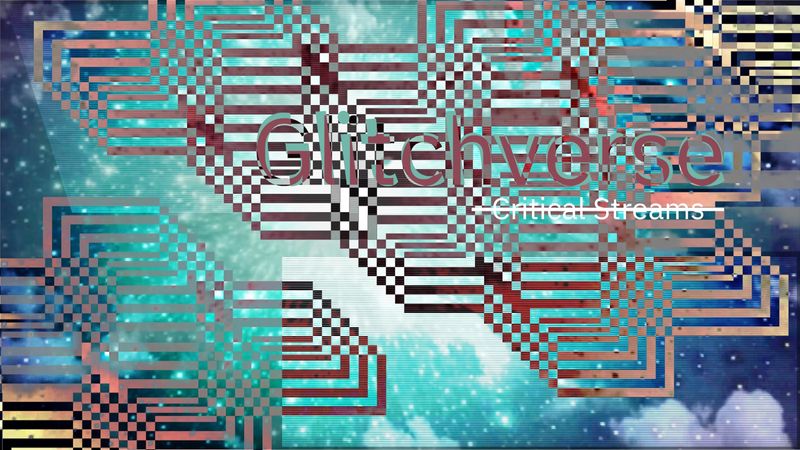 ‘Glitchverse’ is a cyber-psychogeographical and otherworldly drift expanding networked bodies (cyborgs) within a networked space (cyberspace) within a networked time (cyberpunk). As a performance-lecture it mediates the reframing of terminologies that must now be adapted to work within online spaces, especially of archives operating within digital ecologies, legal regimes, technical infrastructures, neural nets, and protocols – across archival ‘deep time’, historical contexts of datafied praxis, born-digital and digitised post-materiality, trip-hop poetic narratives, data streamed world-building, academic Glitch trivia, digital philosophy, and the universe as digital data – the works.

This cyberformance overdrive will attempt to discuss several imperative questions: In a time when right-wing and populism drive the democratic consensus-based machinery, what can dissent based post-democratic practices teach us? What does unlearning mean and how can hope to have new sympathetic encounters of equals? How can we replace the Internet of Things (IoT) with an Internet of Accountability – as a decolonial praxis? What does accountability mean when we are trapped within our own filter bubbles generated by algorithmic bias and an increasing digital divide? What role may poetry have in a world-space generated by code? What are the digitized manifestations of ‘time as technology’, and what will we do with ‘time’ when we find a better technology than time, where the linearity of time is increasingly being flattened through ever-increasing access to information and its hypermediations? If the universe is a computer, and if the fundamental matter of the universe is not carbon, quarks, or genome, but information that is broken into a simple digital binary, what does it means for us as posthuman digital beings in a post-information age, and how can we employ a cybernetic model of thinking to look at the universe in an atomic fashion and to aim to decode it? In the twilight zone of science, where matter and energy now collide with the inevitability of information as material, what is reality if the entire cosmos is a simulation? What are the archival tools at our disposal in a time that can be described only as archival time?

Cyberspace is the pre-eminent terra incognita of the twenty-first century and a wide range of maps and map-like visualisations have been produced to comprehend it. Technologies of cartographic production have often been explained through narratives of scientific progress. As a consequence, the history of cartography tends to be written as a history of technique, with an underlying assumption that rational decision making leads to the adoption of improved technologies and updating institutional practices when they become available. In
both applied and scholarly writing, the computerisation of cartography is conjoined inprogressive discourses of scientific advancement and increasing accuracy and depth of knowledge. This fits within with a long-running storyline of progress in cartography: art becomes science, florid designs become a formal display, the named cartographer becomes an anonymous technician, and the Word becomes the archive.

This lecture-performance will be conducted live, over a period of 40 minutes and will be accompanied by a glitch-and-found-soundscape, as well as simulated conversations between non-entities, video streams and pop-culture-bombings.